AUGUSTA, Maine — More than 50 years after Maine first instituted a state income tax, former Gov. Paul LePage is calling for its elimination as he seeks a third term in office next year.

The former two-term governor officially kicked off his campaign this week after filing to run for a third term earlier this summer. He is looking to unseat Gov. Janet Mills, a Democrat who has sought to undo much of his legacy on issues including Medicaid and the size of state government, but has left his tax cuts in place despite objections from progressives.

Efforts to reform Maine’s personal income tax are not new, and they have not always fallen neatly along partisan lines. Maine first enacted a personal income tax on a bipartisan basis in 1969. More recently, Democrats attempted to move Maine toward a mostly flat income tax rate just over a decade ago, only to have the change rejected by Republicans who mounted a successful people’s veto.

LePage was successful in reducing tax rates in Maine as governor, but made little headway on his goal of eliminating the personal income tax, as even Republicans in the Legislature were skeptical. The historical debate provides insight into the key obstacles LePage could encounter if he wins the Blaine House and tries to eliminate the tax.

The origins of Maine’s income tax

The Maine Legislature contemplated a state income tax more than a century ago, going so far as to bring forward an amendment to the state Constitution, but it failed via a referendum in 1920. The Republican-led Legislature considered a personal income tax 30 years later, but opted instead to adopt Maine’s first sales tax in 1951.

The idea gained traction in the 1960s as lawmakers looked for additional sources of revenue, and it became an issue in the 1966 gubernatorial race between incumbent Gov. John Reed, a Republican who opposed the income tax, and then-Secretary of State Ken Curtis, a Democrat who said he would favor it as a mechanism to raise revenue if necessary.

Curtis won that election by six points, and remains to this day the last challenger to unseat an incumbent governor in Maine. The Legislature debated the income tax again in 1967, but lawmakers were skeptical, citing the administrative cost of a new tax, along with worries that it would cause workers to leave the state, according to the Bangor Daily News archive. The effort failed, with only a handful of Democrats voting in favor.

“There is no such thing as a fair tax,” Senate Minority Leader Floyd Harding, D-Presque Isle, who favored the measure, said after it came up short. “It boils down to a matter of what people will tolerate.”

But concerns about state revenue and tight municipal budgets forced lawmakers to reconsider the income tax again in the following legislative session. In March 1969, a University of Maine professor warned the Legislature’s taxation committee that local property taxes could double over the next decade without increased financial assistance from the state.

Proponents pitched the income tax as an alternative to increasing other taxes. They argued it was more fair than a sales tax, as it would have less of an effect on low-income people and retirees, according to a Bangor Daily News article at the time, and that it would be more responsive to economic growth, producing more revenue without an increase in rates.

Enacting such a tax would require bipartisan support, as both chambers of the Legislature were controlled by Republicans. But lawmakers ultimately achieved consensus and passed Maine’s first state income tax in 1969, setting up a tiered system with a top marginal rate of 6 percent. The corporate income tax was also enacted that year.

Political spectators predicted the new tax would be unpopular, but Curtis still won reelection in 1970. A year later, opponents of the tax gathered enough signatures for a ballot question aiming to repeal it. But the referendum failed in November 1971 by a 75-25 margin.

The Legislature continued to make changes to the personal income tax over the years, adjusting the tax brackets and raising the top marginal rate as high as 8.5 percent. A Democratic Legislature under former Gov. John Baldacci passed a law in 2009 to create a 6.5 percent flat tax on income, except for a surcharge on individuals making more than $250,000.

The change was to be paid for by extending the sales tax to apply to more services and increasing the food and lodging tax, a provision that garnered significant pushback from much of the state’s business community.

Opponents mounted a people’s veto challenge, and, in June 2010, they were successful, with 61 percent of voters casting ballots to overturn it. Republicans built on that momentum to sweep back control of the Legislature later that year, when LePage was elected governor for the first time. 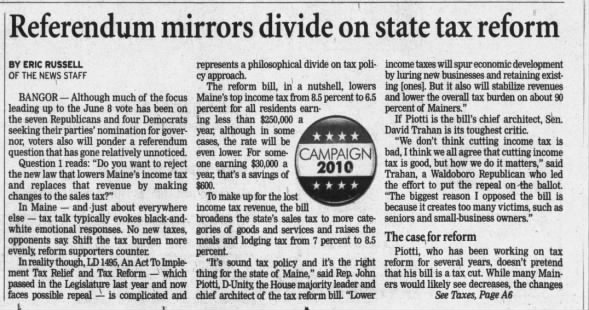 LePage and the Legislature ultimately lowered the top marginal tax rate from 8.5 percent to 7.15 percent in 2011. And four years later, fresh off his reelection, the Republican governor proposed another set of income tax cuts offset in part by extending the sales tax to more goods and services. He said he was working toward phasing out the personal income tax entirely over five years. But his plan was met with skepticism from Republicans and Democrats alike, and the constitutional amendment LePage suggested to eliminate the income tax never made the ballot.

Even with the LePage-era tax cuts, the personal income tax still generates more revenue than any other source in Maine. For the current state fiscal year, it is expected to account for about 44 percent of all undedicated state revenue, roughly $1.8 billion.

Efforts to eliminate it in the coming years will have to confront the same issue lawmakers have debated for more than 50 years — coming up with another way to raise revenue.

More articles from the BDN